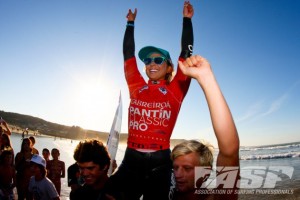 PLAYA DE PANTIN, Galicia – Spain (Saturday, September 15, 2012) – Sage Erickson (USA) 21, has won the ASP 6-Star Cabreiroa Pantin Classic Pro today in clean 3-4Ft surf at the iconic Playa de Pantin over Alizee Arnaud (FRA) 22. It was a perfect sunny day in Galicia for the women’s finals, culminating this afternoon with the crowning of Erickson in a one-way final she led from start to finish.

Erickson was on a rampage all-day dominating heat after heat and netting some of the highest scores of the entire event with her aggressive backhand attack. Erickson was rewarded for her perfect timing, hitting the lip multiple times in the most critical sections of the waves to claim a logical win in Galicia.

“This victory feels amazing, coming from California with a win and having so much support there and then coming here and you know the Spanish are so welcoming and their cheers have motivated me throughout the event. I’ve just been thanking God every heat, it’s been challenging conditions and he’s kind of helped me with my wave selection, so I’m just so grateful and excited to be back at number one!”

Erickson started her final bout with the same rythmn she’s be counting on all event, and found a great looking lefthander she exploited all the way to the inside shorebreak. She took an early lead and never let her opponent get back in the game, finding a decent backup quickly after. From then on, Erickson built momentum and improved on her scores gradually finding yet another excellent score over the 8.00 point mark.

“I’ve noticed great competitive surfers, they’ll start their heat strong with some good waves, so I think I just counted on having a quick start and then to build momentum throughout, not be chasing the scores but rather posting them early on.”

Second on the ASP Women’s World Rankings arriving in Pantin, the Ventura local moves ahead of fellow Californian Courtney Conlogue to sit in pole position before the remaining two events of the 2012 season. After a difficult first season amongst the World’s Best where she only once managed to attain the quarter-finals, Erickson has secured her spot into next year’s elite World Championship Tour.

“Courtney is such an amazing competitor and a dear dear friend in California, and you know to be in that number one spot in the World Qualifying series is so amazing, the group of women is so prestigious and to be on top feels amazing! This is my third year coming to Pantin and it’s been an amazing experience, there’s so much natural beauty here and where I’ve been staying the people have been so welcoming and that’s been wonderful. I love Pantin and Europe and I’m so happy to finally win here!”

Alizee Arnaud (FRA) 22, runner-up of the 2012 Cabreiroa Pantin Classic Pro, had been quietly advancing through the early rounds of the Cabreiroa Pantin Classic Pro but was efficient in making the most out of the waves today, assuring her spot in the finals after defeating fellow French competitor Pauline Ado in the quarters and Australia’s Felicity Palmateer in the semis.

“I’m super happy, that’s my best result since my Junior World Title so I’m stoked! These conditions are not exactly my favourite, kind of fat waves and especially lefts, so I’m even happier to have surfed well in those waves. I’m used to surfing a punchy right at home at the Santocha, a lot hollower, but I’ve been surfing a lot in Hossegor South and it does resemble this.”

Netting her first major result on the Star Tour, Arnaud who was crowned ASP Women’s World Junior Champion two years ago, has stepped up her game in Pantin and gains valuable ranking points to eye her maiden qualification for the ASP Women’s WCT. The talented regular-footer whose training grounds include the famous French barrel of La Graviere, showed that her surfing repertoire allows her to rival with the World’s Best and will be a force to reckon with in the near-future.

“Qualification and the European Title are my main objectives this year, so I’m looking forward to the last events and I hope I can qualify but also have fun trying to! I think it’s an advantage to have the last events of the season in Europe because I have my family and coach following me there and can count on their support which is super important in these deciding events.”

Bianca Buitendag (ZAF) 18, was defeated in the first semi-final of the Cabreiroa Pantin Classic Pro by event winner Sage Erickson but clinches her second best result on the Star Tour in 2012 and adds points to an already excellent total towards qualification for the Women’s World Championship Tour next year.

“When I won the Round of 12, I thought ‘anything better than this is just a blessing.’ I’m super stoked to be able to make it all the way to the semis and surf against Sage, she’s been ripping the whole event and it’s been a good final to watch! I just wanted to surf to my potential without having the nerves and I did it so I’m stoked!”

An outstanding performer all week, Buitendag has displayed strong forehand surfing in the fun lefts on offer at Playa de Pantin and looks forward to the last two stops of the European leg to show once again that she has what it takes to make it to the Elite Top 17.

“It’s probably the best surf I’ve ever seen in a contest, like 3-4Ft, lefts, running all the way to the shore, we couldn’t have asked for any more! I told myself, I have two really bad results so in the last three events I want to have two good ones. I’ve got one under the belt, and out of two events I want one more good one!”

Felicity Palmateer (AUS) 20, placed equal third in Pantin and nets her best result so far this season. The young Australian who’s been powersurfing her way into the semi-finals, fell short to an in-form Alizee Arnaud in their 30 minute exchange.

“I’m pretty happy with this result,” Palmateer stated. “I haven’t had that many strong results throughout the year, this is the best so far and I’m happy to have this under my belt and hopefully I can get two more good results in the upcoming two events! I’ve been to Pantin two times before this and I love it here, it reminds a little bit of home, the coastline, the waves have lots of power, it’s really nice here!”

Currently ranked 18th on the ASP World Rankings before entering the Cabreiroa Pantin Classic Pro, Palmateer chips in an important 2,080 points to get closer to the top. The last goofy-footer in contention after Buitendag’s loss in semi-final n°1, Western Australia’s Felicity Palmateer felt at ease in the powerful waves of Playa de Pantin and has shown consistence throughout the whole event.

“When I first got down this morning it wasn’t really good on the low tide but when it filled in and got high that left down the beach started to work really well so it ended up being really good! I think it’s just as much chance either way, but maybe if you’re a natural-footer you can hook it under the lip better, I’m not sure. I think wave selection was a crucial thing, especially because there are so many closeouts out there you really have to pick the right ones.”

The next call has been set to 11:30am tomorrow for the final day of the men’s event. Conditions are expected to improved with lighter winds and yet another warm and sunny day in Pantin.

The 2012 Cabreiroa Pantin Classic Pro is scheduled from September 12-16, 2012 in Playa de Pantin, Galicia. For all results, photos, video highlights, press releases and LIVE webcast, log on to pantin.aspeurope.com.